The store will not work correctly in the case when cookies are disabled.

Why is ThyrAid™ So Effective? ThyrAid™ is a breakthrough proprietary supplement that effectively combines the most powerful and extensively researched ingredients, giving you an all-in-one solution. Every single ingredient in ThyrAid™ was hand-picked by a team of medical doctors and scientific researchers, based on clinical data and designed to promote ultimate thyroid health and get results more effectively than any other thyroid supplement available.

ThyrAid™ contains 16 tested ingredients that meet the strength and purity standards of the USP/NF (United States Pharmacopeia–National Formulary). Each ingredient was carefully researched and included based on clinical data. No other non-prescription solution comes close to ThyrAid™ in terms of quality and purity of ingredients.

Recommended dose for adults is 2 (two) capsules daily with meals - 1 (one) in the morning and 1 (one) at night as a dietary supplement. This product is to be used for general or overall thyroid health and for Hypothyroid. But caution should be taken if you have Hyperthyroidism or have been diagnosed with Graves disease.

ThyrAid™ is a completely vegan friendly product. With capsules that are made entirely from vegetable cellulose, this product is 100% vegan friendly.

Iodine is a key element that enables the thyroid gland to produce the two key thyroid hormones, T3 and T4, which assists in balancing metabolism. For optimal thyroid function, the body needs the correct amount of iodine. Iodine deficiencies are directly correlated with a poor functioning metabolism and weak immune system, creating an opportunity for free radical destruction in the thyroid gland.

Kelp provides a rich source of vitamins and minerals like iodine, potassium, magnesium, calcium and iron. One of the main benefits of kelp is to promote healthy hair and skin. However, kelp is mostly recognized for its naturally high iodine content, which helps the thyroid gland function correctly and efficiently. Iodine is essential for the formation of thyroid hormones, which regulate the body's energy production, promote growth and development, and help burn excess fat.

Selenium protects against the effects of iodine toxicity which is essential for people who suffer Hashimoto and other autoimmune thyroid disorders. Selenium supplementation has a significant impact on inflammatory activity in thyroid-specific autoimmune disease and the reduction in inflammation may limit damage to thyroid tissue. Its antioxidant properties protect the thyroid gland and its 'selenium-dependent enzymes' are also used in the conversion of thyroxine (T4) to the biologically active thyroid hormone, triiodothyronine, ensuring proper functioning of the thyroid.

Clinical trials have shown groups taking selenium reported improvements in their mood and well-being, and lab tests found lower levels of the antibodies that attack the thyroid.

Magnesium deficiency causes a variety of symptoms, but one of the most common is an impaired functioning thyroid gland. Magnesium deficiencies may lead to hypothyroidism which can then make it hard for your body to lose weight or keep off excess weight, and regulate body temperature. It is believed that the central biochemical event in thyroid disease is that of an "acquired, altered mitochondrial function due to deficiency of magnesium, and selenium". Deficiencies have also been to depression, mood swings and sleep disorders.

Studies have shown that hypothyroidism is a known factor for an increased risk of congestive heart failure and that patients with hypothyroidism are less likely to recover. Magnesium deficiencies contribute to this by causing a general weakness in heart condition, and lack of blood circulation, as well as reducing thyroid function.

Vitamin B12 is found in every cell of the body and is required for 'cellular metabolism and energy production, the production and regulation of the DNA and for fatty acid metabolism'. Studies show that many more individuals suffer from vitamin B12 deficiency than was previously believed and because the symptoms of hypothyroidism overlap with those of vitamin B12 deficiency, experts believe there is a link between both deficiency states.

Zinc deficiencies can impair immune response and growth rate. Zinc is required in the conversion process of thyroid hormones, assisting the thyroid gland to transform the inactive hormone T4 into the active hormone T3. Together with signalling the pituitary gland to activate the thyroid, zinc also plays a role in promoting the activity of the thyroid receptors located in the body.

Copper works with zinc to help produce thyroid hormones. An imbalance of copper and zinc in the body can affect thyroid health. Copper has been shown to possess an essential capacity in thyroid metabolism, principally in thyroid hormone manufacturing and absorption. It actually triggers the production of T4 hormone, while also precluding the blood cells ability to over-absorb T4 by adjusting the body's cell permeability levels. Additionally, copper is essential for the activation of Thyroid Stimulating Hormone (TSH).

Manganese studies show the vital role of manganese in liver function, fat metabolism, and liver antioxidant status. A lack of manganese is associated with reduced function of thyroid hormone production in the body due to the effect that excessive free radical stress may place upon cell membrane activity in the liver. Manganese, a mineral, is required to produce a special antioxidant enzyme called 'manganese-dependent superoxide dismutase (MnSOD)' which forms an antioxidant defense system that enables the cell to produce energy and heat efficiently. If this enzyme is missing, the activation of thyroid hormones will be affected.

Molybendum a very important trace mineral which acts as a key component to help the body maintain a proper pH equilibrium. If pH levels are too low, oxygen levels may decrease, which results in lowering metabolism, therefore burning less fat. Molybdenum interacts with enzymatic systems to influence overall well-being and regulate metabolism.

L-Tyrosine combined with iodine, promotes thyroid hormones. Without the presence of tyrosine the thyroid becomes underactive. L-Tyrosine, an amino acid, maintains an active and central role in the manufacturing of thyroid hormones T3 and T4. Active in the metabolic process, L-Tyrosine combines with iodine to synthesize thyroid hormones necessary to effectively transform or metabolize calories from the food we eat into usable energy. Tyrosine also plays an essential part in the production of hormones such as dopamine, serotonin, and norepinephrine which affect mood levels.

Schisandra is an anti-viral, anti-histamine, liver protective herb, plus an adrenal tonic. It acts to promote hormonal balance and stabilize normal organ functioning when the body encounters environmental, physical, or mental stress. It has been shown to protect the adrenal glands from the damaging forces of stress. Schisandra berries provide powerful antioxidant protection, specifically from free radicals and other toxins that may cause cellular damage.

Ashwaghnada (Withania somnifera) is an Ayurvedic herb that has been used for thousands of years to boost stress tolerance and generally rejuvenate the body. It has been shown to enhance thyroid hormone levels by directly working as an antioxidant that reduces the amount of lipid peroxides forming in the liver. It is an adaptogenic herb, potent, multidimensional and effective in working with your body to modulate the endocrine (hormone) system, assisting hormonal balance.

Bladderwrack (Fucus Vesiculosus) is an herbal supplement that may be beneficial in treating your hypothyroidism. Bladderwrack (Fucus vesiculosus), is a seaweed used medicinally to treat numerous health problems, including hypothyroidism. It has been shown to positively improve the regulation and functioning of the thyroid gland, as well as promote the production of thyroid hormones in an underactive thyroid and has been documented in its ability to 'augment issues of lipid imbalances' associated with poor thyroid functioning, therefore, enhancing weight loss.

Gotu Kola, Coleus Forskholii & Gugulipids are herbs often used to address thyroid health. Gotu Kola is a hormone and nervous system regulator that enhances energy and vitality. Coleus forskohlii is one of the most effective herbal remedies for hypothyroidism. It is believed to stimulate the thyroid functioning by increasing the production of thyroid hormones. It also helps in losing the weight gain associated with hypothyroidism. Gugulipids are herbal extracts derived from the gum resin of a tree called Commiphora mukul that grows in northern parts of India. The active ingredient of this herb is a compound called guggulsterone that stimulates the thyroid hormone.This herb possesses antioxidant, anti-inflammatory and immune modulating qualities. 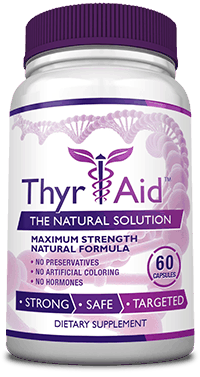 We're so confident that ThyrAid™ will work for you, that we are pleased to offer a 60 day Risk Free Money Back Guarantee!

You have 60 days, no risk, to try ThyrAid™ . If you are not 100% satisfied with our product, you may receive a refund (excluding shipping charges). Please read the return policy for more details. If you wish to take advantage of the price discount by ordering multiple bottles,please call before the end of the 60 days. All bottles, both used and unopened, must be returned within the 60 day guarantee period to be refunded.

After testing our product, having excellent results from our previous customers and receiving new success stories daily, we know we can offer to our customers this money back guarantee.

Out of all of the products sold, less than 1% of our customers have requested a refund. This means our product works!

Security when ordering ThyrAid™ :
ThyrAid™ uses the top technology in credit card protection. You can feel safe ordering from ThyrAid™ . All purchases are 100% encrypted and secure.

Discreet Packaging :
Your privacy is important. All packaging is 100% discreet and has no mention of the contents inside.